The most famous Balinese temple with stunning sunset views from the rock cliff temple overlooking the Indian ocean. You can also visit Garuda Wisnu Cultural Park to see the 3rd highest statue.

Peninsula Island (water blow) is located in the Bali Tourism & Development Corporation (BTDC) district where large waves of sea water from the Indian Ocean continually crash against jagged limestone edges of a cliff. 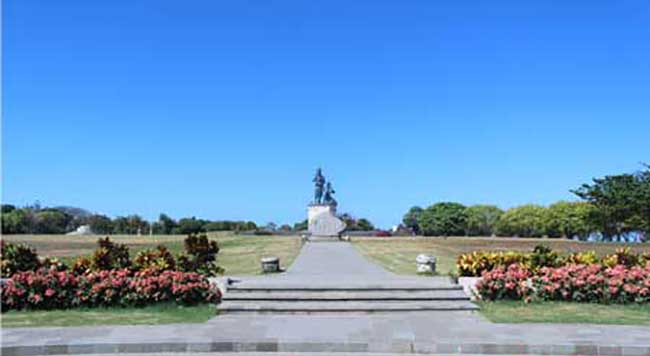 The water blow is the outcome of the narrowing crag below the cliff face that channels a surge of water up to 30 meters high from its base following strong currents.

This phenomenon results in giant, irregular splashes of wave that can reach several meters high.

Garuda Wisnu Kencana Statue or commonly called GWK is located in the southern Badung area about 20 minutes from Kuta.

The 75-m tall, 65-m wide statue was designed by Nyoman Nuarta. It sits atop a pedestal to bring the total height of the monument to 121 m (397 ft), which is nearly 30 m (98 ft) taller than the Statue of Liberty in the United States.

Designed to be Indonesia’s tallest statue, Garuda Wisnu Kencana was inspired by a story from Hindu mythology about the search for Amerta (the elixir of life). According to this myth, Garuda agreed to be ridden by Lord Wisnu in return for the right to use the elixir to liberate his enslaved mother.

Padang Padang Beach is located in the village of Pecatu to get to this beach, we have to go down the stairs made on the cliff.

Padang Padang Beach is one of the best beaches in Bali beside Dreamland Beach, Kuta and Nusa Dua.

White sandy beach stretches in front of you, clear blue water and flat, suitable for swimming. This beach became popular when actress Julia Roberts was shooting on the Padang beach for her new film Eat Pray and Love.

The Balinese Hindus believe that the three divine powers of Brahma, Vishnu, and Siva become one here. That belief results in making Uluwatu Temple a place of worship of Siva Rudra, the Balinese Hindu deity of all elements and aspects of life in the universe. Uluwatu Temple is also dedicated to protect Bali from evil sea spirits.

Kecak Dance is located in Uluwatu Temple narrates the story of Asia’s most famous epic, Ramayana.

Although originally from India this story has since spread to every corner of Asia, in particular, South East Asia through the same channel as Hindu and Buddhist teachings.

What makes the Kecak special is that the accompanying music is provided by the human voice, the gamelan suara, a choir of a hundred men or more sitting in concentric circles, swaying, standing up, lying prone as the story develops.

Amongst the swaying masses the voices of the storytellers can be heard telling the unfolding tale. Uluwatu Kecak Dance is one of the favorite tourist attractions.

Located in Uluwatu Temple which has a Hindi Ocean background this dance starts around 06.00pm you can watch this dance together with sunset.